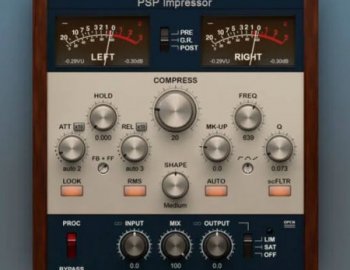 PSP Impressor also works very well in combination with the PSP Saturator. With the PSP Impressor before the PSP Saturator in the signal path (think of it like placing a bus compressor before a tape machine), you can employ both plug-ins simultaneously (using subtle settings!) in order to impart a very cohesive sound, like your mix was being produced on expensive analog hardware. Of course, you can also reverse the order, placing PSP Saturator before PSP Impressor - never be afraid to experiment!
Download from turbobit
VST, VST3, AAX
38 MB
Links | Ссылки