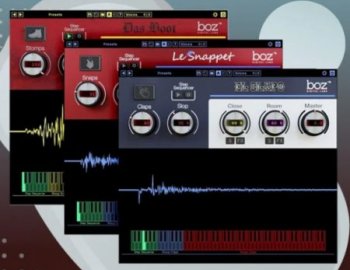 Easily generate ultra-realistic handclaps, foot stomps, and finger snaps, from a single snap, clap, or stomp, to a huge crowd of up to 150.

El Clapo is a one-of-a-kind plugin that can generate ultra-realistic handclap tracks, from a single intimate-sounding handclap, to a raucous mob of 150 head-bangers. El Clapo even lets you control how sober or intoxicated the crowd is with adjustable round-robin timing control. It also features three mic adjustable positions with control of close/mid blend, room size, and width. Mic position controls also feature solo buttons and FX buttons that give you access to full-featured compressors and equalizers. El Clapo also features MIDI velocity control, panning, and a step sequencer with 12 editable patterns.

Le Snappet, like its brother El Clapo, enables you to create ultra-realistic finger snaps, from a single snap to a smoke-filled club full of beat poet aficionados showing their appreciation, now that snapping is the new clapping (you can’t hold a beer and clap at the same time). Snap lets you control how intoxicated your crowd is via the Slop control, and also provides essential mix features, including front-to-back placement via mic blend and positioning controls for front, mid, and room mics. Plus, you don’t have to load up on processing plugins thanks to built-in compressors, EQ, and width control. Snap also features MIDI velocity control and a step sequencer with 12 editable patterns.

Like its brothers, El Clapo and Le Snappet, Das Boot can generate super-realistic foot stomps, from a single spoiled baby to a stadium filled with sports fans waiting for Queen to rock them. Meticulously recorded with three mic positions and packed with the same powerful features found in El Clapo and Le Snappet, Das Boot gives you full control of mic placement, width along with compression and EQ. Of course, there’s the ever-popular Slop control that lets you adjust how tight your loose your stomping will be. Das Boot also features a CPU-saving round-robin setting and a 12-step sequencer that lets you create up to 12 patterns.