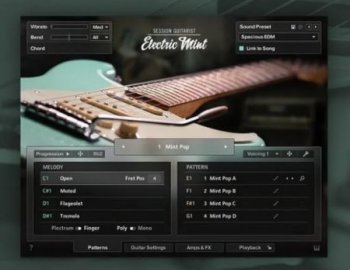 Delivering the versatile flavor of one of the most iconic electric guitar models, Session Guitarist – Electric Mint is sampled from an original 1960 solid-body guitar made in the USA. With a focus on songwriting, the new instrument allows users to create their own melodies or explore 222 patterns across 53 song presets covering a wide range of genres, styles, and performance techniques.

Users can craft licks, grooves, and solos right out of the box, with 71 ready-to-go sound presets ranging from clean and DI to crunchy and high gain, as well as a range of life-like articulations. The instrument builds on previous features in the Session Guitarist collection, with a variety of amps and speaker cabinet emulations, new effects including the Supercharger-GT compressor, auto-wah ‘Cry Wah’ effect, and convolution reverbs to simulate the sound of amps in different rooms.

Electric Mint can also be used as a chord library by dragging any of the four-bar chord progressions, patterns, or voicings into a DAW for further editing, or to use the MIDI elsewhere in a session for expansive songwriting capabilities.