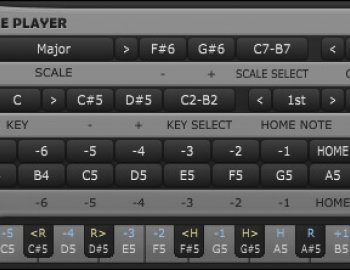 Scale Player is a MIDI effect plug-in that allows you to play different scales in any key and mode using the idea of relative notes rather that static note values. The plug-in calculates the intervals between pitches based on the selected scale and the user can move up and down the scale playing melodies, arpeggios or even chords using a few keys.

The result is an unusual way of playing instruments, which can be fun, inspirational and much easier to play since you don't have to worry about hitting the wrong note, memorizing all the scales in all the keys and practicing complex riffs and phrases that can be a challenge to play the usual way.

Scale player is a new kind of instrument that like any other instrument may take a bit of time to learn and master, but it will be a rewarding experience. It's ideal for live playing and with some practice you can play complicated licks and phrases that would impress everyone.

How does it work?

Scale player acts as an VST instrument plug-in that takes the input MIDI data and swaps it with the processed one. The output can be routed to any other instrument in the host application. The AU version works as a MIDI processor effect in hosts like Logic Pro x that support the type.

There are 16 keys with offsets assigned to them that are used to move up and down the scale and play different notes relative to the last note that has been played.

For example '+1' moves one note up the scale and plays it and 'Home' resets and plays the root note for that scale. Home can be changed to one of the notes on that scale (1st, 2nd, etc) using Home Note menu. The repeat key plays the last note.