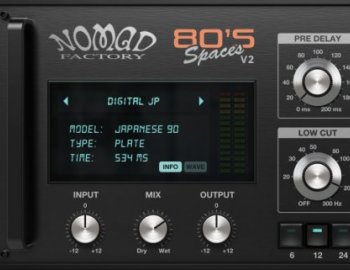 Nomad Factory in association with MoReVoX and Plugivery Distribution today proudly announce the release of their latest plug-in, 80’s Spaces. It is a uniquely designed plug-in that captures the essence of the spacial ambiance heard on many of the greatest records of the era.

80's Spaces is an original “80’s vibe” plug-in that was initiated by Nomad Factory’s founder Bernie Torelli of Nomad Factory and Eric Nolot, President of Plugivery Distribution, 3 years ago.

The development of 80’s Spaces was initiated by Plugivery CEO Eric Nolot and late friend Bernie Torelli of Nomad Factory. They joined forces with Sabino Canonne (MoReVoX) who brought his expertise in convolution and unique Impulse Response development. The joint effort paid off as 80’s Spaces is now one of the most used reverb units in the professional audio production industry.

Not only has the product been greatly improved, but the entire framework has been completely revamped to be fully compatible with the latest operating systems such as Windows 11 and macOS 12 Monterey (with native M series silicon chip compatibility).

“Nomad Factory users have been eagerly waiting for this. This upgrade will affect the entire Nomad Factory product line over the course of the next few months”, says Eric Nolot, CEO at Plugivery / Nomad Factory:

“It has been very challenging for myself and the development team at Plugivery to take over the Nomad factory brand, a few years back, when owner and CEO Bernie Torelli sadly past away. Our developers have been hard at work to port, literally, millions of lines of codes to our modern framework assuring backward compatibility, and FREE upgrades for the next decades. We hope to have all Nomad Factory products ported to our new framework as soon as we possibly can” adds Eric.

Current owners can now download the latest version of 80’s Spaces (v2), for free from the Nomad Factory website. They will immediately notice the clean “notarized” installers and the very slick new GUIs that now come in a funky purple background or a very “classic” deep grey. These settings are now available from a convenient preference menu along with other useful settings.