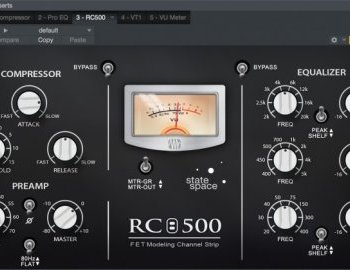 The Channel Strip Collection provides two new channel strip plug-ins with preamp, compressor, and EQ that let you add a distinctive character to your tracks and mixes.

The RC 500 plug-in models the company’s popular RC 500 channel strip, which includes a low-distortion, high-gain, solid-state Class A preamplifier; custom-designed FET compressor; and custom semi-parametric EQ. PreSonus’ VT1 plug-in includes a modeled high-end tube preamp, along with the compressor and EQ. The compressor and EQ for both plug-ins have been engineered to deliver musically tasteful results, even at extreme settings. In this, they differ from more analytical-sounding plug-ins designed purely based on physical aspects.

Realism of State Space Modeling
The RC500 and VT1 were realized through State Space Modeling, a proprietary, sophisticated, and groundbreaking physical modeling technique developed by PreSonus. The State Space approach analyzes a complete system schematic and recognizes the circuit as a set of discrete differential equations. The involved nonlinear circuit elements are modeled meticulously down to the component level in order to include all those "dirt-effects" that make the analog original sound so good, such as bias shifts, time dependencies, and saturation. The resulting DSP code is then CPU-optimized for maximum efficiency while taking advantage of Studio One’s superior sound quality. This progressive technique enables the creation of perfect virtual models of complex audio hardware.

Compatible with Studio One 2.6.5 and higher. Artist and Professional
Download from turbobit
Studio One
30 MB
Links | Ссылки