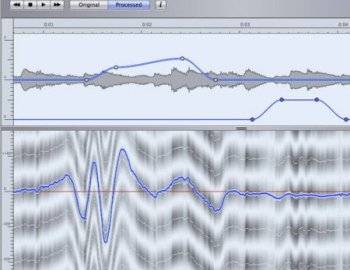 For over a hundred years, music has been recorded on mechanical mediums. And for over a hundred years, there has been a problem with this: wow and flutter. Who isn’t familiar with the wobbling and warbling, the droning and dragging? Mechanical degradation caused by defective devices or sticking tapes, by ageing or defective storage. In the past, it was usually impossible to get rid of wow and flutter.

Countless recordings of renowned orchestras, big bands and rock groups are currently slumbering deep in archives. Yet they are unusable, simply due to wow and flutter. The tapes worthless, the recordings lost to posterity. Until now.

For, in Capstan, there is now for the first time a program capable of removing wow and flutter from recorded music. Whether on tape, compact cassette, wax, shellac or vinyl.

The Capstan algorithm is capable of recognizing not only the smallest amounts of wow and flutter but also continuous speed variations within the musical material. It allows detailed editing that extends even to letting you draw in the curve by hand. Capstan’s detection of notes and their deviations is based on the patented DNA Direct Note Access technology made famous by the program Melodyne, which is used in major studios the world over for the editing of pitch and timing.
Download from turbobit
21 MB
Links | Ссылки