The 15 best VST plugin drum machines in the world today 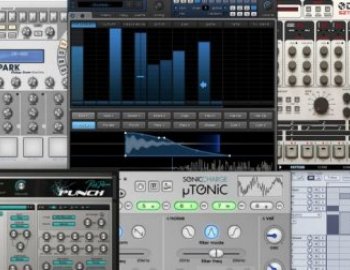 Broadly speaking, drum machine plugins fall into two categories. Some are designed specifically to emulate the classic hardware beatboxes of the past - perhaps adding a few new features to aid tone-shaping and flexibility - while others offer an original take on the concept and are capable of producing sounds of the type that won't be so familiar.

This being the case, you might decide that you need more than one of the things: it isn't really the case that there's one drum machine out there that can do absolutely everything.

We asked MusicRadar users to nominate and then vote for their favourite beat making software in 2015, leaving us with the list of the best plugin drum machines in the world today that you're about to dive into.

Note that we haven't included drum samplers/modules here:in order to qualify for this list, a plugin has to have its own sequencing capabilities.

With that stipulation made clear, let's get into the results… 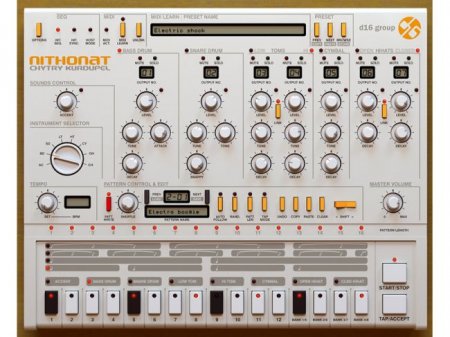 Nithonat is a turbo-charged version of Roland’s TR-606 drum machine, the sister product to the TB-303 bassline synth that was released in 1982.

As on the real thing you get kick, snare, high and low toms, open and closed hats, and cymbal sounds. There’s also a step sequencer with pattern-based arrangement capabilities. All of the sounds are synthesised in real-time.

Nithonat offers many more sound-shaping controls than its hardware predecessor and is definitely one for electro lovers to check out. 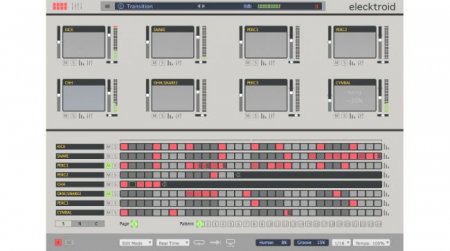 If you just want a drum synth, check out AudioSpillage's rather tasty DrumSpillage 2, but if sampling options and an 8-track rhythm sequencer are also on your must-have list, Elecktroid is the product you should be checking out.

There are four synthesis algorithms to work with: bass, snare and wood drums and a hi-hat. In the sequencer, track lengths can be adjusted independently and you can assign a probability value to any step in a sequence.

Throw in some FX and realtime control options and you've got a very capable drum machine that comes at a very reasonable price. 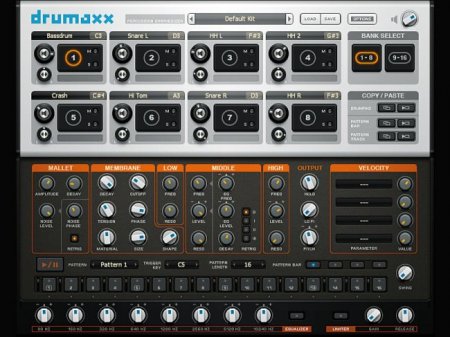 Drumaxx is a physically-modelled drum machine that enables you to adjust the properties of the drum head, mallet and striking action. This means that you have plenty of control over the sound.

In fact, a surprisingly wide range of tones can be produced - everything from snares and cymbals to glitchy special effects sounds and dance hits. There’s also old-school affair with 16 programming buttons shown on the GUI.

Drumaxx won’t replace a real drummer or even become your primary source of club beats, but it should appeal to anyone looking for interesting, original percussion for experimental genres, or those seeking the kind of flexibility, customisation and on-the-fly tweakability to which synthesis is ideally suited. 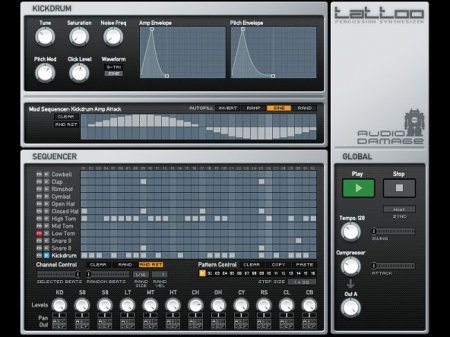 Tattoo offers up 12 synthesized drum sounds, and all the usual suspects are included. Each has a variety of appropriate editing parameters, and these are very well set up. They really reward experimentation and you don't often find yourself hankering for more control than is on offer.

Sequencing is handled by a programming grid with up to 32 steps - you simply click on the blocks to pencil in where you'd like each drum hit to fall. There are also some nice features for adding variation and randomness.

At first, Tattoo might leave you underwhelmed, but after spending a bit of time with it, you should come to realise what a cleverly crafted little powerhouse it actually is. Slow burner or not, it’s a rather excellent plug-in, and well worth a look for anybody who employs electronic drums. 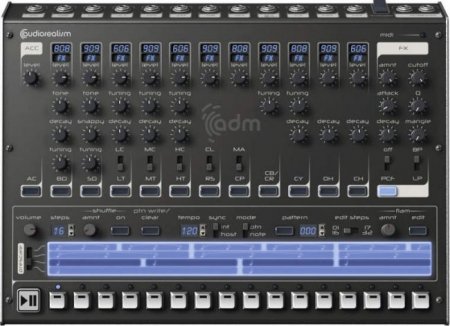 While some companies have emulated Roland’s classic TR beat boxes in separate plug-ins, Audiorealism has put them all into one. ADM (Audiorealism Drum Machine) offers 909, 808 and 606 sounds, a step sequencer and plenty more besides.

Happily, these emulations sound stunningly authentic: analogue modelling is used for all of the 606 and 808 sounds, and it's a combination of samples and synthesis for the 909 (which is how the real 909 tones are generated). To top things off, it’s even possible to mix and match sounds from different kits. 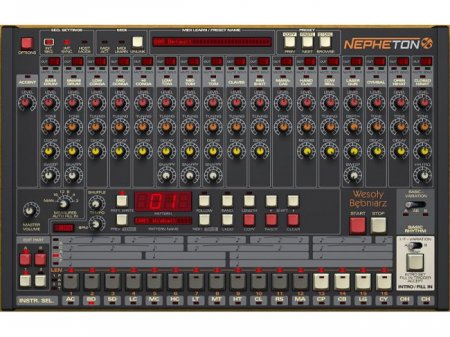 In true D16 style, Nepheton recreates all the functions and sounds of the machine it emulates - Roland’s TR-808 in this case - and throws in a few extra tricks for good measure.

While these aren’t as numerous as in Drumazon, the company’s 909 clone, all the drums do have extended controls in comparison to their 808 counterparts. These include the Sweep knob for the kick, which dictates the range of its pitch envelope, and the snare’s Decay knob, which lets you make the sound as tight or as splashy as you like.

It’s not the most flexible drum machine on the market, but if you’re after that kicking electro sound, Nepheton is a sure-fire winner. 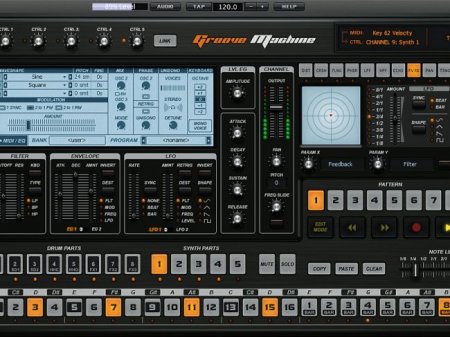 If you make progressive-sounding genres, there are plenty of cool sounds and grooves to get you going. Take a quick listen to any of the excellent presets by Toby Emerson and you will hear how nice Groove Machine can sound.

Some people will love Groove Machine; some people will dismiss it as a toy; and most will have a couple of hours of old-school groovebox fun and then never touch it again. Try the demo and find out which camp you fall into. 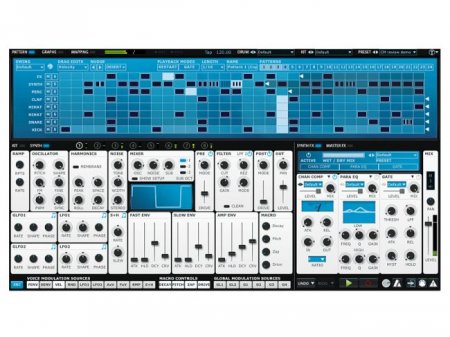 Tremor is a virtual analogue drum machine built on DCAM circuit-modelling, complete with polyrhythmic pattern sequencer, FXpansion's TransMod modulation system, a bucketload of percussion-orientated effects, and nary a sample in sight.

The two things that really set Tremor apart are the sound and the brilliant polyrhythmic sequencer. While it always comes across as authentically 'analogue', there's also a crisp, modern edge to the noises it makes that we've honestly never heard before in a non-sample-based drum machine. 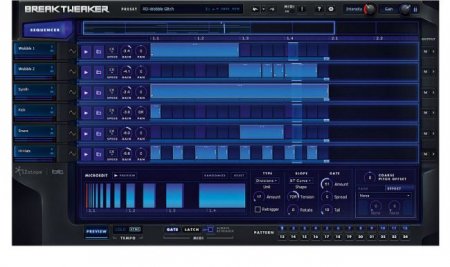 BreakTweaker is, at heart, a one-shot drum machine/sequencer, but with the killer feature of built-in 'micro-editing'.

BreakTweaker centres around a six-channel sequencer; the really cool thing is that each sequence can have both its playback speed (1/2x, 2x, 2/3x, 3x, etc) and sequence length (1-32 steps) adjusted.

Each sequencer track has three Generator Lanes, each of which can operate in one of two modes: dual-oscillator Synth or Sampler (WAV and AIFF). Thus, you can stack a combination of any three of these to create each of the six sounds.

Both the Filter and Distortion sections sound nice, and each of the three Generator Lanes has up to eight modulators available to it: four AHDSR envelopes and four LFOs.

It all adds up to an undeniably clever and powerful system, though one that's angled primarily at EDM producers who seek a more direct route to Skrillex-level tweakery. 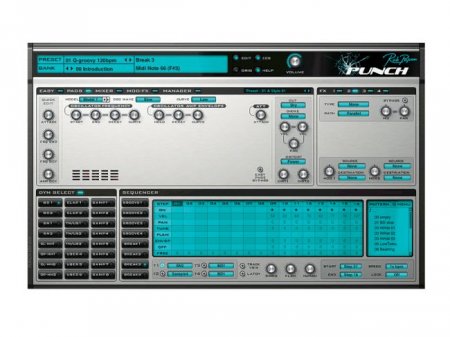 The idea behind Punch is simple and familiar: take some synthesizers optimised for percussion, throw in sample playback capabilities and some well crafted envelope and modulation options, add effects and a sequencer, and garnish with a multiple-output version.

It's clear that a huge amount of time has gone into making sure the drums - whether synthesised or sample-based - sound crisp, punchy and lush. They all slice through the mix beautifully and have bags of presence and space.

Punch adds a new twist to the sequencing paradigm, offers a huge range of excellent sounds, delivers some genuine innovations and is very versatile. As such, it merits close attention. 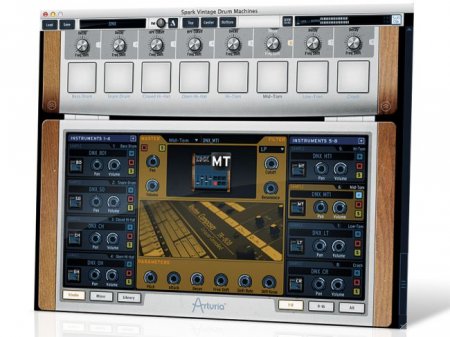 The audio quality is good sounds can be freely mixed and matched between kits, and each sound features six bespoke editing parameters.

Throw in a decent step sequencer and you’ve got a comprehensive classic drum machine solution. 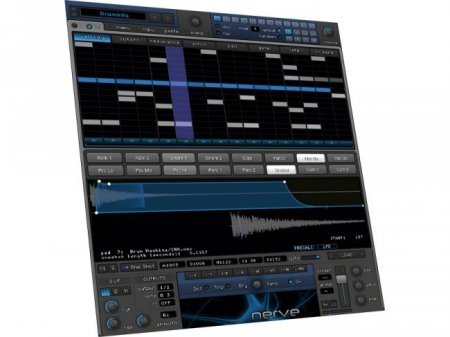 Nerve is the brainchild of Deadmau5 and Steve Duda. It’s a drum machine that sports powerful effects, a sequencer and up to eight stereo outputs. It’s also pretty intuitive, and offers an easy-to-use built-in sidechain compression feature.

This is one of the reasons why Nerve is ideally suited to producers of house music; its clever handling of REX files and 2GB worth of artist samples are two others. In fact, if you’re a fan of Deadmau5, you’ll probably like this. 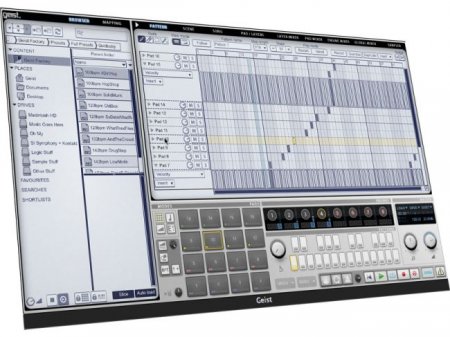 FXpansion launched its Guru drum machine way back in 2005, so by 2010 we were beginning to think that we’d never see a successor. But then it arrived: Geist is cut from similar cloth but actually contains completely new code.

Whether you want to work with loops or single hits, this is a supremely elegant and powerful beat-making solution that comes with high-quality slicing, mixing, sampling, automation and effects tools. Geist can get pretty intense, but if you want to go deep with your electronic beat-making, it’s one of the best bits of software you can buy. 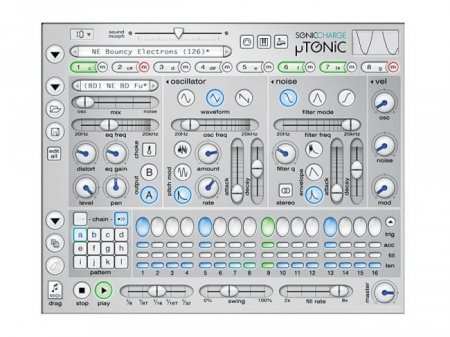 This eight-channel drum machine from the creator of Reason's Malström synth has been chugging along for quite a few years now, and it still has a great reputation among enthusiasts and pros alike.

Each drum tone is generated by a synthesis module that features an oscillator and a noise generator and can be also be run through a filter, EQ and distortion There’s a step sequencer, and plenty of patterns come included. MicroTonic won’t appeal if you like your drums to sound ‘real’, but for lovers of electronic rhythms, it offers endless possibilities.
http://www.musicradar.com/news/tech/the-15-best-vst-plugin-drum-machines-in-the-world-today-410653
Links | Ссылки