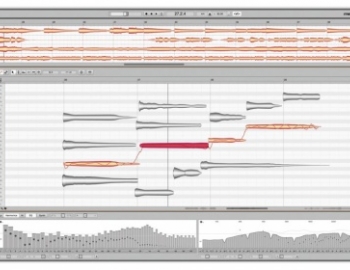 NAMM 2016: Updates to Celemony Software's pseudo-magical pitch editor Melodyne don't come alone very often, but when they do, you can expect them to feature some as-yet unimaginable new technology.

Back in 2009, we got access to individual notes in chords, with the polyphonic pitch editing capabilities of Melodyne Editor- dubbed DNA by Celemony.

For version 4, Melodyne has really turned up the heat, offering comprehensive spectral editing features, tempo detection and click generation, all within a multitrack setup. Dare we say that it's beginning to operate sort of like a DAW in itself?

Going deeper than 'simply' letting you edit notes in chords, Melodyne's spectral editing capabilities give you access to a note's harmonics, allowing you to raise and lower individual frequencies. A bouncing-ball 'analyser' is overlaid on a representation of the sound's frequency spectrum, representing where its spectral energy lies, creating its timbre. 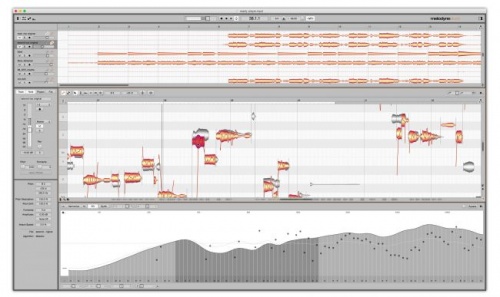 But isn't this just what an EQ does? Not really - EQing a sound will affect the volume of set frequencies; the frequency of the harmonic you've chosen to boost or cut will change as different notes are played. Melodyne's note detection and separation keep the harmonic profile you've chosen consistent, literally changing the timbre of the whole track, no matter what notes are played - as if the instrument used to record it had been reshaped. You can think of it like a key-tracking EQ, if you like.

It's not all rocket science though, as several 'macro' sliders can be employed to fulfil common functions: Brilliance acts a bit like a high-shelf filter, affecting the highest partials of an instrument's sound more; the Contour control accentuates or lessens your spectral edits; Odd/Even can remove odd or even harmonics; and Comb acts to provide a comb filtering effect over the timbre.

Multiple tracks can be shown and combined for editing in one window at your discretion, helping you to match up different parts. This function is only available in the full Studio version of the software (see below).

Melodyne's Direct Note Access technology can now be used on multiple tracks, and their notes can be edited simultaneously from the same note editor area.

With pitch follows tempo, and it's not a huge mental leap to conceive Melodyne as applied to rhythm and musical pacing. This is taken further in version 4, with tempo detection.

Melodyne can analyse a live performance as to its tempo - including any wavering - offering you a tempo curve that can then be manipulated to take control over the tempo at any point.

Melodyne is available now from the Celemony website. You can bag the Studio version, with every feature mentioned here, for €699/$849; Melodyne Editor, which jettisons the Sound Editor and multitrack capability, for €399/$499; Assistant, which unloads the DNA technology, for €249/$249; and Melodyne Essential, which only allows basic pitch and timing editing, for €99/$99.
http://www.celemony.com/en/start
Links | Ссылки